The reality of plate tectonics and continental shift are things we take for granted now; much like heliocentrism, planetary magnetism and the fact that illnesses do not derive from an imbalance of humours. However, of these truisms, the first two only became accepted in mainstream science in living memory.

There was a time within the past sixty-odd years when geoscientists propagating the theory of continental shift were treading the path of “career suicide”. The groundwork behind the acceptance of his theory came about through a painstaking mapping of the ocean floor and, if one person could be put forward as having done the leg work in this regard, it was geologist Marie Tharp.

Marie Tharp was born in Michigan, USA, in 1920. Her father was a soil surveyor for the US Department of Agriculture’s Bureau of Chemistry and Soils. As his work brought him – and his family – all across the United States, Marie had attended twenty-four high schools by the time she graduated.

In considering third-level education, her preferred institution for studying literature did not accept women. As a result, Tharp enrolled at Ohio University where she graduated with a major in English in 1943 at the height of the Second World War. As with the Great War before it, this conflict depleted the male-dominated domestic workforce and research institutions, as a result many colleges opened their doors to females for the first time.

Tharp enrolled in the University of Michigan during the war and was awarded a Master’s degree in petroleum geology. She subsequently attained a third degree – this time in mathematics – while working briefly in Tulsa, Oklahoma; taking evening classes in order to escape a career in micropaleontology which she later decried as “tedious”.

With fresh qualifications, Tharp took work at the Lamont laboratory, Columbia University in 1948, beginning a professional collaboration with geologist, Bruce Heezen, that would last several decades. Due to the ongoing Cold War, and the need for accurate cartography for submarines, US funding for ocean-floor research was in abundance at this time. As a female, Tharp was not allowed on the ocean-going research vessels, work which Heezen took up, and so she was engaged in the heavy work of collating all the findings and painstakingly converting them into maps.

Despite the Atlantic-going research vessel having numerous embarkation points, and taking measurements in an un-gridlike manner, Tharp consistently noticed throughout the ocean floor, from north to south, that there were two mountain ranges running parallel to each other with a considerable cleft between them; a rift valley, of sorts. Despite having to map all her work out again from the beginning, on the insistence of her superiors, there was no mistaking this reality: Tharp had discovered the longest geological formation on earth. As she later said:

After another six weeks to arrange and piece together the profiles in proper order from west to east, I completed six more-or-less parallel, transoceanic profiles of the North Atlantic. I noticed immediately the general similarity in the shape of the ridge in each profile. But when I compared the profiles, I was struck by the fact that the only consistent match-up was a V-shaped indentation in the center of the profiles. The individual mountains didn’t match up, but the cleft did, especially in the three northernmost profiles. I thought it might be a rift valley that cut into the ridge at its crest and continued all along its axis. When I showed what I found to Bruce, he groaned and said, “It cannot be. It looks too much like continental drift.”

The notion of continental drift was known at the time. Known and scorned —  hence the initial insistence that Marie redraw the maps. However, having finally become convinced of the worth of their findings, Heezen presented them at a talk at Princeton in 1957.

Although Heezen accepted the existence of the ridge, he initially asserted that it was due to a tensional crack in the earth’s crust. And, despite one senior geologist declaring after the talk “Young man, you have shaken the foundations of geology!”, the reception was not at all positive. Tharp later noted: “at first, it [the response] was one of amazement. And then sceptical, very sceptical. And, finally, extremely scornful.” Undaunted, Heezen fought his corner, bringing more and more geologists around.

In the midst of all this conflict, Tharp continued behind the scenes to build up a case for the ridge and drift theory: “I was so busy making maps I let them argue. I figured I’d show them a picture of where the rift valley was and where it pulled apart”.

It was several years before Tharp and Heezen’s findings really took acceptance in the mainstream geoscientific community; a series of ocean floor maps commissioned by National Geographic in 1967 based on Tharp’s work cemented this acceptance. In 1997, the US Library of Congress listed Tharp as one of the four greatest cartographers of the 20th century. Seeing one of her pieces hanging next to pages from the journal of Lewis Clark and an original draft of the Declaration of Independence, she wept.

Several years later, Tharp was awarded the first annual Lamont-Doherty Heritage Award for her life’s work and, in 2009, Google Earth included the Marie Tharp Historical Map layer to allow people to view it using their interface.

Marie Tharp died on 23 August 2006 at the age of 86. Given her achievements and the obstacles she faced, her modesty and sanguine approach to her life’s work are truly remarkable. As she later said of her research: “I worked in the background for most of my career as a scientist, but I have absolutely no resentments. I thought I was lucky to have a job that was so interesting. Establishing the rift valley and the mid-ocean ridge that went all the way around the world for 40,000 miles—that was something important. You could only do that once. You can’t find anything bigger than that, at least on this planet.” 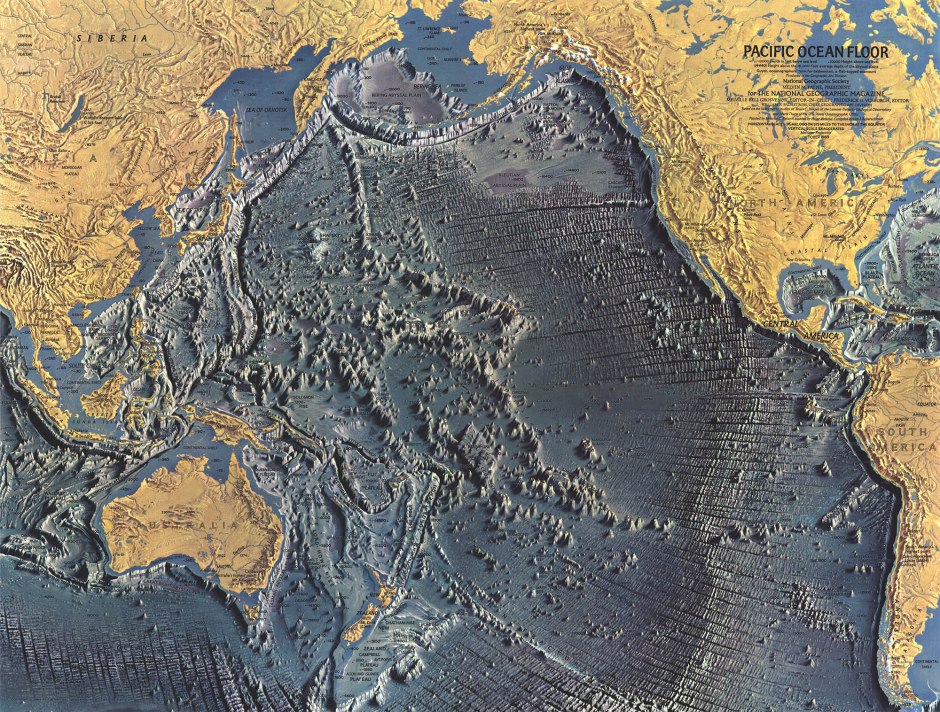 (Map based on Marie Tharp’s findings. Image from codex99.com)