The obesity epidemic affects women and men of every ethnic group in the United States, but strong gender and racial disparities in the risk of overweight and obesity exist. African American women are currently more at risk than any other group in the United States: 82.1% of African American women are overweight or obese (defined as having a BMI of 25 or higher), compared to 76.2% of Hispanic women and 64.6% of Caucasian women, according to the 2011-2012 National Health and Nutrition Examination Survey (NHANES). Socioeconomic factors, such as inequalities in access to healthcare, healthy food, and safe places to exercise, are known to be important causes of these and other racial disparities in health characteristics. 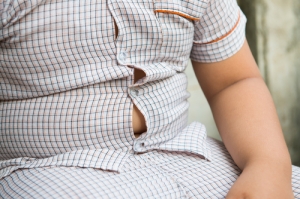 In contrast, “only” 69.1% of African American men are overweight or obese – a percentage that is still alarmingly high in absolute terms, but lower than the percentages for Caucasian men (73.2%), and Hispanic men (77.9%), according to the NHANES data. A similar pattern has been reported for type-2 diabetes, a disease strongly associated with overweight and obesity: according to a 2007 study in The American Journal of Public Health, the incidence of diabetes is higher among African American women (24.5%) than among Caucasian women (20.7%), but lower among African American men (16.7%) than among Caucasian men (19.6%).

Why do African American men have a relatively low risk of overweight, obesity, and diabetes, despite facing many of the same socioeconomic disadvantages as African American women? A new study in the open-access journal Frontiers in Genetics  suggests that the cause may be partly genetic.

“Here we show that West-African genetic ancestry may afford protection against central adiposity in African American men, but not in African American women,” says Yann Klimentidis, Assistant Professor at the Epidemiology and Biostatistics Department of the University of Arizona, the study’s lead author.

Central adiposity (“belly fat”), the build-up of excess fat under the skin of the lower torso and around the internal organs, is a strong risk factor for obesity and diabetes, as well as for high blood pressure, high blood sugar, disease of the heart, liver, and pancreas, and some cancers.

In the new study, Klimentidis and colleagues analyze genetic data from 4,425 volunteers, all healthy African American women and men between the ages of 45 and 85. These data had been collected in the course of two prospective studies sponsored by the National Heart Lung and Blood Institute of the NIH: the Atherosclerosis Risk in Communities Study (ARIC) and the Multi-Ethnic Study of Atherosclerosis (MESA).

Klimentidis et al. focused on approximately 3,500 nucleotides (“letters” in the genome) that often differ between people from West Africa and Europe. In this way, they could estimate the degree of West African genetic ancestry – the fraction of the genome inherited from West African ancestors – for each participant in the study. A 2015 study in The American Journal of Human Genetics has shown that this fraction varies considerably among African Americans, due to differences in genetic contributions from ancestors from other ethnic groups, especially Europeans and Native Americans.

The researchers conclude that the gene pool of the African American population contains one or more gene variants – originally inherited from West African ancestors — that give partial protection against central adiposity, but only when present in men. Further research is needed to identify these gene variants and the physiological mechanisms through which they operate, to help prevent and treat central obesity.

“There are still many unanswered questions, including: What are the specific genes that afford protection against central adiposity in men of West African ancestry, or conversely, What are the genes that predispose individuals of other ancestries to greater central adiposity? What cultural, socio-economic, or other factors might explain the lack of protection in African American women?” says Klimentidis.

“The reasons for group differences in multifactorial traits like obesity remain difficult to understand, especially when simplistic explanations do not easily explain complex patterns, like group differences which are not constant across sexes. We believe these new analyses begin to shed light on the factors underpinning the some ethnic disparities in obesity,” says David Allison, Distinguished Professor of Public Health and Director of the Nutrition Obesity Research Center at University of Alabama at Birmingham, a coauthor on the study.

READ THE FULL STUDY IN FRONTIERS IN GENETICS