In exploring the psychological bases of human musicality, research expands simplistic categories of emotions, producing advanced tools which can sort feelings evoked by music and assess the emotional benefits of musical abilities.

Here we interview Professor Marcel Zentner, Professor of Psychology at the University of Innsbruck, Austria, and Co-Chief specialty editor of section Personality and Social Psychology, in Frontiers in Psychology. His main research interests are in personality development, psychological assessment, emotion and music.

We can all relate to music, which individually sparks some form of emotion within us, but what kind of emotion is it? Research shows that music induces numerous types of emotion, more in fact, than the bland categories usually referred to, such as happiness or sadness. “It is obvious that these categories do not capture the richness of feeling in response to music”, says Zentner. “It is no secret that music elicits ‘happiness’ or ‘positive affect’, so the merit lies not in stating the obvious, but in specifying musical happiness in all of its multiple forms.”

The psychology of emotion focuses on broad categories, sadness, happiness, anger, fear, surprise, but are these categories too simplistic in analyzing our emotions? “They are useful for the analysis of emotions in many everyday situations, but their relevance to musical emotions is limited.” Their use had a simple reason: Researchers worked from established emotion models towards music, rather than letting music shape a model suited to its emotions. Using the latter approach, Zentner and coworkers ran several studies in which listeners described a variety of music with a broadest possible emotion vocabulary. Based on an analysis of these ratings, they identified nine emotion-categories including wonder, nostalgia, tenderness and transcendence.

To ensure that these less well-studied emotions were real, “we choose music which was good at inducing nine emotional categories and looked at what happened in the brain”. After all, the verbal report methodology used in the first studies could have produced emotions that people think they experience without actually experiencing them.  Zentner followed his intrigue and observed, whilst music was played, that when people were in a scanner, differential activation patterns could be seen on their brain, depending on whether the subject felt nostalgia or wonder, for instance. “That was a nice validation of the model.” As a result of these findings, Zentner and coworkers created a tool that allows to describe these music-evoked emotions, the GENEVA EMOTIONAL MUSIC SCALES (GEMS) (Please refer to the information box below). “The GEMS-classification system constitutes the first comprehensive attempt to map out the terrain of the emotional experiences provided by music.”

More recently, Zentner has turned his attention to a different, but related question: Are musical individuals more accurate at recognizing emotions and, as a result, more empathetic? To address this and other key questions related to musicality, Zentner developed a computerized battery for the objective assessment of musical abilities, the PROFILE of MUSIC PERCEPTION SKILLS (PROMS) (Please refer to the information box below). This tool was designed to overcome several limitations inherent in widely used forms of musical ability assessment.

A highlight of the group’s work with the PROMS is the finding that musical ability is associated with emotional ability, in particular the capacity to recognize vocal expressions of emotion. “This is and is not surprising. Because emotional signals are expressed in somewhat similar ways in speech and music, the result is plausible. However, to actually show how the two are related would not have been possible without a fine-grained tool like the PROMS.”

What is the societal value of this research? There are several domains of application, but two stand out. “The effectiveness of music as a therapeutic agent can be substantially enhanced by work using the PROMS, because it allows to discern which types of musical skills relate to which kind of non-musical abilities, such as speech, memory, or empathy. This knowledge allows specifying what kind of musical training can work as a remedy for particular neurological or psychological deficits.” Zentner wants to continue his research about the role of musical ability in the development of a range of cognitive and socio-emotional skills.

“The GEMS has received much attention, including some commercial interest.” Platforms such as spotify and other electronic libraries can use the musically apt terminology of the GEMS to categorically tag musical content and tracing emotional response impact. “We are faced with an entirely unsuspected area of development for the GEMS.”

For more information on the research by Professor Zentner and his collaborators click here. 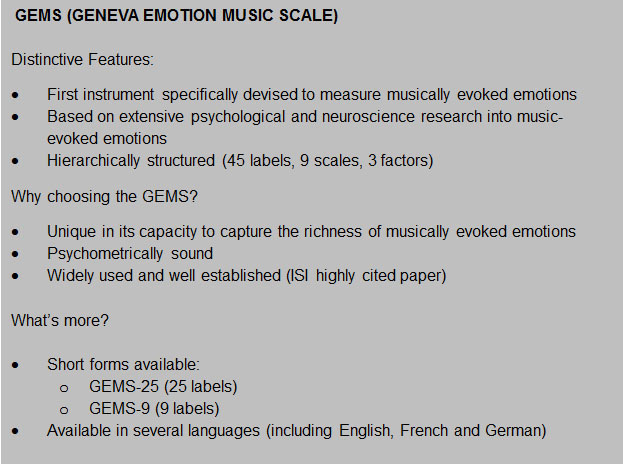 2 Comments on Measuring the emotional power of music