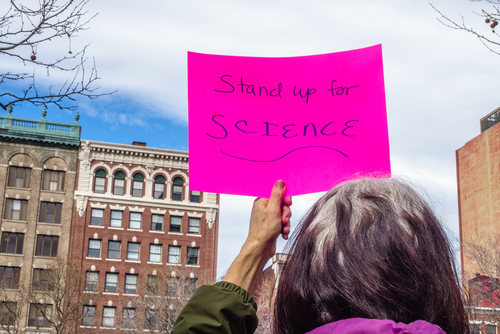 On Earth Day, April 22nd, 2017, Frontiers joins thousands of scientists and supporters to March for Science and the role that it plays in our daily lives.

What does science mean to you? This coming Saturday 22nd of April on Earth Day thousands of scientists, and supporters of science, will take to the streets in more than 500 cities across the globe to celebrate science and the role that it plays in our daily lives.

Frontiers is proud to be a partner of the Lake Geneva region march – home to us and many other world class scientific institutions like CERN, the World Climate Research Program and EPFL where we are based – because we believe that science belongs everyone. It finds cures for diseases, improves people’s lives and generates new technologies that may help us to solve some of the biggest problems we face today, like climate change.

We also believe in open science in a world where the reality remains that 90% of the latest research results are locked away behind expensive subscription paywalls. This traditional subscription journal system, also referred to as the “gatekeeper” system justifies itself by saying that only the best science is selected to pass through. However, many studies have shown that trying to predict impact is like gambling and a serious side effect of this selection process is that perfectly valid research is rejected when it is first submitted to a journal and is then bounced around from journal to journal before it finally does get published.

The Frontiers Open Access model takes on the responsibility of publishing all valid science and focuses on optimizing efficiency and quality control.

The scale of the problem is massive: of the 2-million research articles that are published every year, at least 1-million valid articles are rejected and bounced at least once before they are published. Just one bounce delays an article by at least 6 months. This means that the total delay to publish valid science is 500’000 years and that every single year researchers waste 100-million hours re-submitting their papers to further journals at a cost of around 10-billion dollars. If an Open Science model was adopted universally, it would eliminate the 500,000 years of publishing delays.

So, why do we need Open Science so urgently now? We are out of time to debate, for example, climate change or the global water crisis. We need to be implementing the solutions right now and that means we need access to our latest science.

If you believe in these things too, join us in Geneva this coming Saturday or share with us why you are marching for science where you live. Together let’s support science, lead the movement to make it open and help make the world a better place.