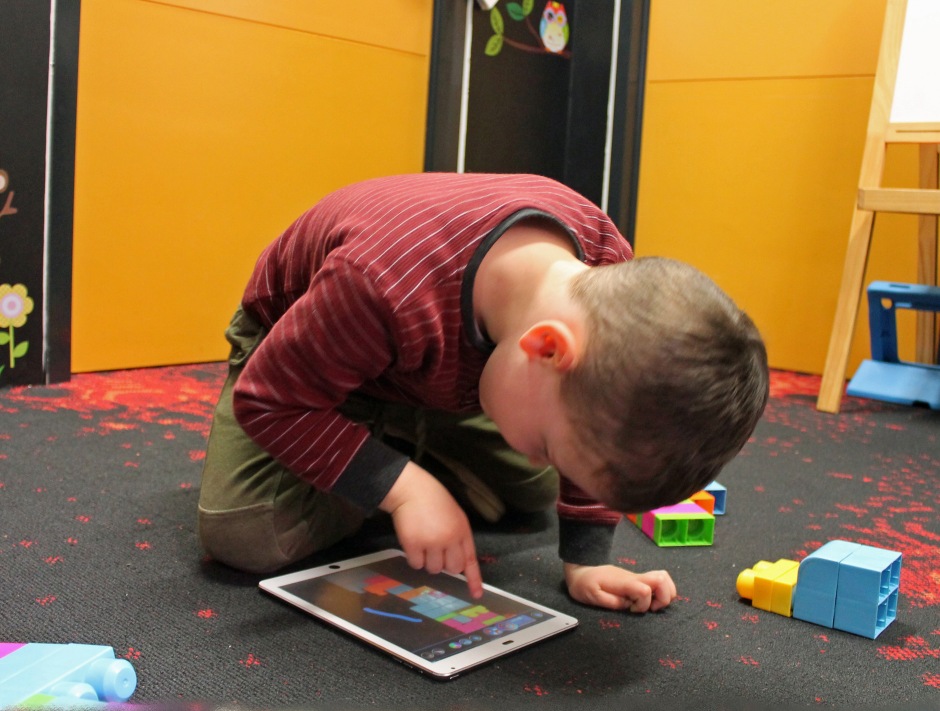 Children practiced the ‘Tower of Hanoi’ puzzle on a touchscreen app or with a physical version using wooden pegs and discs. Image by Brittany Huber.

Contrary to conventional belief, researchers show that children can learn to solve a problem on a tablet computer and transfer this learning to the physical world.

Researchers confirm that when 4-6 year old children learn how to solve a puzzle using a touchscreen tablet, they can then apply this learning to the same puzzle in the physical world. This contradicts most previous research and suggests that different screen learning media could have different effects on skill transfer.

As tablet computers become more popular, children are using them as early as their first year of life. Companies market a huge array of interactive educational apps for kids, but are they effective and can they teach real-world skills?

Guidelines published by some government bodies suggest that while children can learn skills from screen-based media, such as videos or touchscreens, they can struggle to apply these skills elsewhere. This conventional thinking is backed by the majority of previous research.

However, some studies have shown that children can in fact translate screen-based learning to real-world skills. These contradictory findings have inspired researchers to further explore this phenomenon. One such researcher is Joanne Tarasuik, of the Swinburne University of Technology in Australia.

In a previous study, Tarasuik and colleagues found that children in Australia could learn how to solve a puzzle on a touchscreen device, and then successfully transfer these skills to completing the same puzzle in the physical world. As this is contradictory to most previous research, the team repeated the study in different children, with a different language and culture, to make sure that the findings were correct and robust.

In this new replication study, recently published in open-access journal Frontiers in Psychology, the Australian team collaborated with researchers in Croatia to repeat their original study with Croatian children. The study used the ‘Tower of Hanoi’ puzzle, which involves moving discs between pegs so that they line up in order on a different peg, using the smallest possible number of moves.

The children practiced the puzzle on a touchscreen app, or with a physical version using wooden pegs and discs, and the researchers measured how many moves they took to complete it, and how long they spent. Some of the children practiced the puzzle several times on the tablet before trying it on the wooden version. This allowed the researchers to see if the kids’ virtual practice could improve their skills in the physical world.

No difference between virtual and real puzzle learning

The children all needed a similar number of moves to complete the wooden puzzle, regardless of whether they had practiced using the virtual puzzle, the physical puzzle, or a combination of the two. From the first to final attempt at the puzzle, all the children also improved their speed.

“We successfully replicated our previous findings that 4-6 year old children can apply knowledge of this puzzle from practice using a touchscreen device, to the physical version of the puzzle,” says Tarasuik.

Not all screen time is equal

The researchers hypothesize that unlike some passive forms of screen learning like a simple video demonstration, the interactive virtual puzzle significantly engaged the children and enhanced their learning, so that they could successfully apply those same skills to the wooden puzzle.

The findings contrast with most previous research in this area, and suggest that different screen learning media, such as video presentations or interactive apps, could have different effects on whether children can transfer learned skills to the physical world.

“These results demonstrate that ‘screen time‘ is not a useful umbrella phrase, as what children can obtain from different types of screen media will vary, and numerous factors can impact their learning outcomes,” says Tarasuik.

“We would like these results to guide future research into how and what children of different developmental stages can learn via touch screen technology, and then apply in the physical world.”

Original research: Transfer of Problem Solving Skills from Touchscreen to 3D Model by 3- to 6-Year-Olds