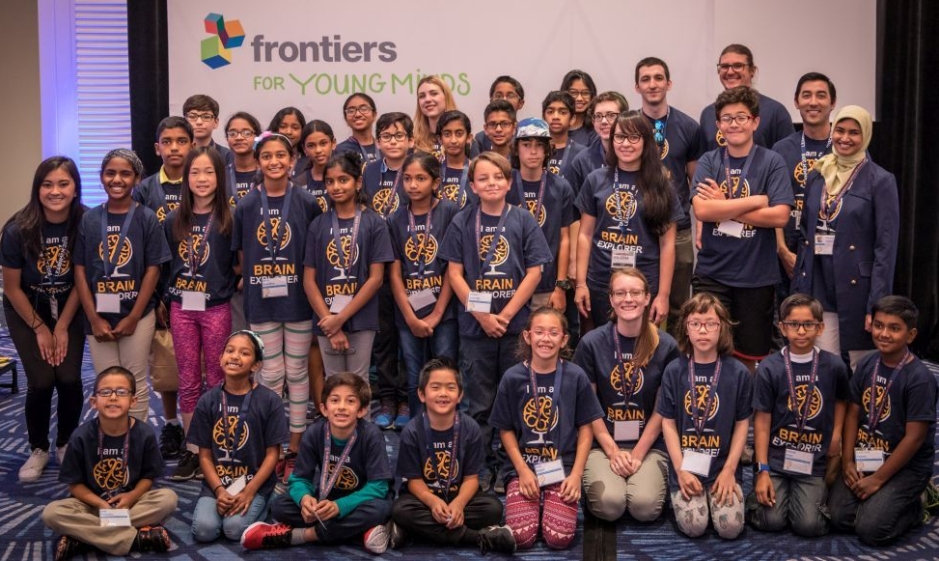 Young students embrace science at UCI’s Center for the Neurobiology of Learning and Memory, and give scientists constructive honest feedback during a live peer review event.

— By Cathy Lawhon from the University of California, Irvine

Neuroscientists are accustomed to defining problems, developing experiments, testing hypotheses and analyzing and defending their findings. But the three research teams appearing recently before a review board from the Brain Explorer Academy were shaking in their lab coats. Penetrating questions and thoughtful critiques were thrown at them by a panel of 8- to 14-year-olds, and it was clear these future scientists had done their homework.

The Brain Festival and Live Review was a feature of the 2018 International Conference on Learning and Memory (LEARNMEM™2018), which celebrated the 35thanniversary of UC Irvine’s Center for the Neurobiology of Learning and Memory. More than 950 professors, researchers, post docs and graduate students from around the world attended the five-day event, which provided a forum for presenting neuroscience breakthroughs and work in progress and assessing the future of the field. If the Brain Explorer Academy kids are any indication, the future looks bright.

“These students meet Saturday mornings to learn about the brain,” says Manuella Yassa, CNLM director of outreach and education. “They’ve studied brain anatomy and function. They’re learned about animal research, ethics, evolution, and careers in science. They worked closely with our science mentors for several months and have built strong relationships with them.”

Academy members were chosen mostly from Orange County schools on the basis of recommendations from teachers and principals and the students’ own short essays about why they wanted to be involved. A balanced mix across genders, age, and schools was also ensured.

The program is free to the young explorers and is supported by the CNLM through foundation grants and private philanthropy. “We’re putting a face to science,” says Mitch Farrell, a second year doctoral student in neurobiology and one of the science mentors.

“We hope it will lead to broader community engagement with science,” adds fellow mentor Noora Siddiqui, a first year doctoral student in the Medicinal Chemistry and Pharmacology Program. Academy participants also learn about what happens once scientists finish their experiments and make discoveries.

“There is no point to doing science if you don’t communicate it to the world,” Yassa says. “The explorers learn about the review process by actually critiquing scientific papers. It took them a while to understand that their comments would be incorporated into the final article. The hope is that they become savvy science consumers.”

At the conference, it was clear that this approach worked. Accomplished neuroscientists mingled with more than 600 parents and their children as the young brain explorers aided them in handling sheep brains and human brains (with the requisite protective gloves) and participating in a mind-bending mirror drawing exercise.

Following the open house, students immediately got to work, evaluating presentations for possible publication in Frontiers for Young Minds, the non-profit open-access journal for youths age 8-15. The journal’s founder, UC Berkeley’s neuroscience professor Robert Knight, explained that all articles must be peer-reviewed and can be aimed at under-12 or over-12 audiences. It’s a useful exercise for scientists, Knight says, because, “You have to truly understand your research in order to write about it in a way a 5thgrader will grasp it.”

Jessica Lin and Vlad Senatorov from UC Berkeley presented their paper, Stress: As We Age, the Shield that Protects the Brain Gets Leaky. Their findings showed that the blood-brain barrier becomes inefficient with age, allowing a protein called albumin to escape and incorrectly bind with receptors in the brain. This causes neurons to misfire and results in cognitive decline. A drug that inhibits that interaction could help, they said. The student panel got it, but had a few suggestions.

“Would there be any side-effects to such a drug?” asked Arkhil, 12, who wants to be a rocket scientist. The panel also asked for a better explanatory graphic. In the end, the paper was recommended for publication with some revisions.

Before the review session began, Tejal Kavkatt, 10, and Shazneen Shaik, 9, said they were most looking forward to the UCI team of Jim McGaugh and Navid Ghaffari who were presenting on People Who Rarely Forget. Tejal called the title “a good hook” that accurately describes the study of people with highly superior autobiographical memory, or HSAM, who remember almost every detail of their lives.

“My knees are trembling,” said the veteran McGaugh, taking the podium after another team had endured a particularly grueling review calling for major revision.

Ghaffari presented findings from 18 years of research, explaining that HSAMs have a widened pathway between two regions of the brain that seems to allow storage and recall of an unusually large bank of autobiographical memories. The panel was intrigued.

“Why is this important to study if so few people have it?” (The team has verified only 100 HSAM subjects.)

“Look at it this way,” Ghaffari said. “If your car breaks down, you can’t fix it until you know how it works. HSAM is the key to solving how memory works.”

“How do you get HSAM, or are you born with it?”

“We think people are born with it,” Ghaffari answered, “but most don’t realize they have it until they’re in their teens. That’s when they seem to realize they’re different from other people.”

McGaugh and Ghaffari breathed a bit easier when, in the end, the paper was accepted with few revisions.

“Thank you for participating in this,” McGaugh told the children. “And thank you to your families. This is a wonderful program to help children engage in science and it will mean a much better future for us all.”

Yassa, agreed, saying a second session of Brain Explorer Academy will launch in fall 2018 with ambitions to add a summer program in 2019.

For this group of brain explorers though, the conference marked the grand finale of their first neuroscience experience. Except for one last thing, said Tejal: “After this, we get a pizza party.”

This article was originally published on the UCI CNLM website.