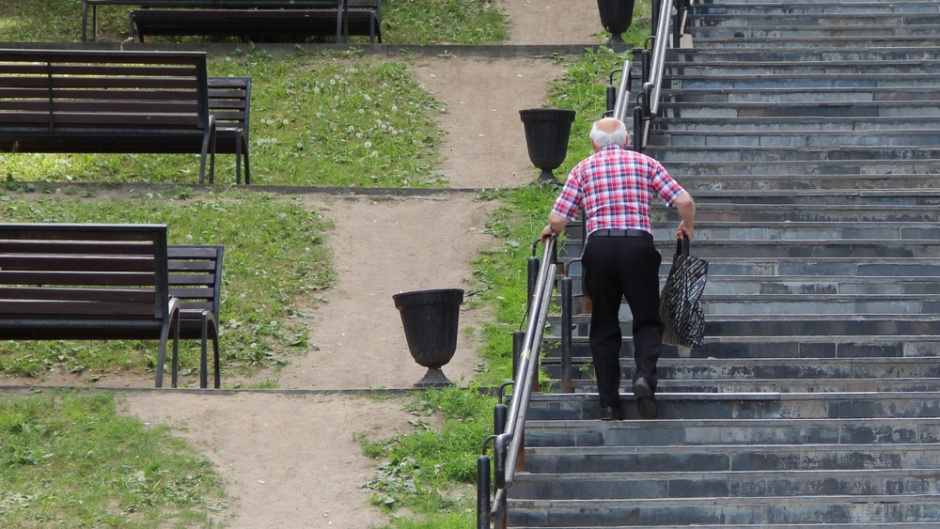 Old age brings a gradual decline in physical functioning, such as the ability to climb stairs, carry groceries, dress and bathe. Image: Shutterstock

Short telomeres may be an independent risk factor for age-related functional decline.

Elderly people with short chromosome caps, or telomeres, are more likely to have difficulty performing daily activities such as carrying groceries, climbing stairs and walking, finds a new study of more than 1,200 people from five European countries. Published in Frontiers in Physiology, the finding holds true regardless of geographical location, age, sex or weight — suggesting that short telomeres are an independent risk factor for age-related functional decline. The study opens the possibility that efforts to slow telomere shortening may have a positive effect on physical ability in old age.

“While several environmental and lifestyle factors may contribute to lower physical function among the elderly, the biological mechanisms for this age-related decline are largely unknown,” says Dr Fawzi Kadi of Örebro University, Sweden. “Our study suggests telomere length may be one biological factor underlying functional decline in aging populations.”

Global life expectancy has doubled since the 1900s. This is the good news. But old age brings a gradual decline in physical functioning, such as the ability to walk, dress and bathe. Such difficulties with basic daily activities can exacerbate other age-related conditions and severely impact quality of life among the elderly.

Telomeres are strongly implicated in the aging process. These DNA sequences at the end of each chromosome are often likened to the plastic tips of shoelaces, serving to protect the chromosomes from fraying and sticking to each other. They also act as a measure of a cell’s age: their length progressively shortens with each round of cell division over a person’s lifespan. Once a critical length is reached, the cell stops dividing — which may lead to dysfunction in tissues and organs.

To overcome these limitations, Kadi and an international team of researchers studied more than 1,200 elderly men and women from five European countries: the UK, Netherlands, France, Italy and Poland. They measured physical functioning through a widely used self-assessment of daily activity, and muscle functioning via a handgrip-strength test. The results were then compared to telomere length, measured from the participants’ white blood cells.

Contrary to some previous studies, the team did not find any significant relationship between handgrip strength and telomere length. However, participants with the shortest telomeres were more likely to have reduced physical function. Even though men and women had different average telomere lengths, as did people from different countries, this finding held out across sex, age, geographical location and weight.

“The study participants have many different genetic and environmental backgrounds, and show variable telomere lengths — but even taking this into account, the findings establish a significant link between telomere length and physical constraints associated with aging,” says Kadi.

Interestingly, the degree of physical ability did not decline linearly with telomere length. Instead, only individuals with the shortest telomeres had a higher likelihood of physical limitations. This supports the notion of telomeres needing to reach a certain length before any effect of this shortening is apparent.

“It is hypothesized that the repair capacity of tissues becomes impaired when telomere length drops below a critical threshold,” says Kadi. “Our novel finding that the influence of telomere length on functional limitation is driven by the detrimental effect of having short telomeres, rather than reflecting a linear dose-response relationship, is in keeping with this hypothesis.”

The researchers caution that the study does not indicate a direct effect of telomere length on functional limitation, nor claim to cover all aspects of physical function which may be relevant to telomere length. They additionally note that other factors not included in the study could also impact the relationship between telomere length and functional decline.

Nevertheless, the findings raise the possibility that efforts to slow telomere shortening may have a positive effect on physical ability in old age.